HOW TO CATCH YOUR READERS? LEARN FROM JK ROWLING WRITING STYLE.

From dark villains to daring heroes, magical incantations to mysterious creatures… reading a novel, you could imagine what awaits you inside the wizarding world of Harry Potter. Admit it! Either it’s Voldemort reborn, Tale of the three brothers or Severus being a half-blood prince – JK Rowling writing style has turned the mystical tale into a gripping story.

Rowling captivates her readers with surprising power of words while provoking them to conjure up the characters and iconic scenes in their heads. Think of Harry’s lightning-shaped scar and the broken glass.

Can you picture it? Of course, you can, and that’s the magic of a movie writer.

Rowling… with her adrenalized words, make you think and feel the way she wants you to while adding to the overall magnificence of the plot. Similarly, if we talk about business writing, it requires the same obsession and passion – until and unless that’s your gig.

Unfortunately, there are no immutable rules for becoming a successful writer, but we have rounded up some timeless anecdotes to help you make the most out of your writing.

Anyone who says learning how to write is easy has never actually tried an intimidating process of putting pen to paper. And we won’t lie to you… replicating JK Rowling writing style is next to impossible. Neither you can use the mending charm to fix mistakes in your writing.

Don’t lose hope! Try out our below-mentioned handy tips; these can help you become a better writer.

1. Use Your Own Words

Okay! Let’s face it … readers have the power of imagining unrealistic things. But with your peculiar writing skills, you need to make them think that way.

What do you think? Is there any magical land? Does Wingardium Leviosa work in the real world? Or you can use an unforgivable curse to destroy someone like Voldemort?

Absolutely not! It was Rowling’s magic of words over your mind that you were envisioning her idea while reading a novel. Surprised? You gotta be.

As far as the business plan is concerned, choose words and the writing style wisely. Make sure to use easy vocabulary so that your audience can comprehend your idea. Using complex expressions will leave no impact on the audience other than making them feel muddled. Remember following a crowd blindly is no option – a business plan can make or break your reputation in the market.

Stand, stretch, take another cup of coffee, and write!

2. Plot Out Your Story

Remember? Harry as a Horcrux and the incident of Snape’s Death? You do, right! That’s the plotting – it was the sequence of events that was making the story intriguing. Indeed, JK Rowling writing style is way different than another movie writer.

Similarly, when it comes to business writing, it always begins with a compelling story. Explain why your business exists – it should address the problems you are solving in the marketplace. Jumping right on to the solution won’t fascinate the audience; let them discover it.

With plotting, make your readers realize their needs.

Take your time, but write well…

The writing process is never-ending….

Do you really think that Rowling would just have been able to dive in right and has penned down the whole series in just one go? You’re mistaken here! The writers go back several times and rework their writing so that it makes more sense.

Either we talk about the Philosopher’s Stone, The Chamber of Secrets, The Prisoner of Azkaban, or The Goblet of Fire – none of these creations of unbelievable magic were perfect in the first place.

Likewise, while writing a business plan, read and improve. As we said, it is a never-ending process. Any piece of paper can be enhanced every time it’s reread. Give each draft of your plan the same attention you give to the first draft to make it better.

This might sound obvious, but it has to be said!

4. Master the Art of Pacing

It’s a magic elixir to keep the readers hooked…

Certainly, JK Rowling writing style is pretty different – the way writer unfolds the story is truly amazing. It’s flow, rhyme, rise, and fall create the urge in the readers to read more while making them anxious for the story to continue.

Remember, Ollivanders in Diagon Alley where a wand chooses the owner and Hermione’s time turner necklace. The way she has created the suspense, or you could say uncertainty in every scene, keeps the readers riveted.

You need to use the same trick in business plans as well. With your write up make every other chapter a cliffhanger for the audience. Besides, it is better to opt for shorter sentences – of course; not every sentence would be the same. You need variation but try to create an oomph.

Be sure…. to keep the readers at the edge of the seat!

If you’re following JK Rowling writing style – beginnings and endings are essentials. Mess up with the beginning, and the readers will not read further. Mess up with the ending reader will forget all the wonderful things you have put together.

Whether it’s the battle of Hogwarts, endeavors of curse master, or disclosure of Snape’s character, Rowling has vividly portrayed the magical world from the start till the end.

Hence, while writing a business plan, the essential part begins at the start; if you do not hook your reader in the beginning, they won’t read the document further. And your plan for getting on board would not work; think about it!

You can use the summoning charm “Accio” to complete your business writing in a matter of seconds… just kidding!

If you are an aspiring business writer, you would know it’s pretty challenging to stay focused, inspired, and motivated. Be it a rejection letter or writer’s block; you would hit a wall at some point during the incredible yet stressful process of writing. But, but, but…

Whenever you find yourself ready to throw your script out of the window, turn to the J.K. Rowling writing style. After all, Rowling knows a thing or two about writing a fantastical, bestselling series.

Time to get typing… 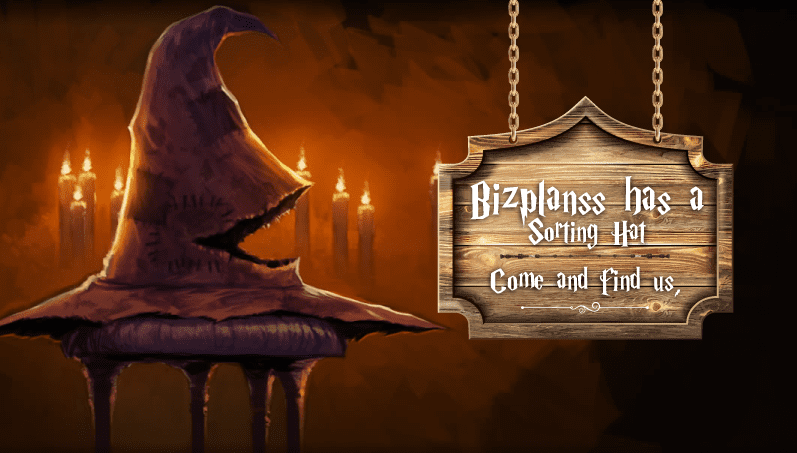 By the way, Bizplanss has a Sorting Hat to help you decide which niche you should choose and with what approach… Evanesco! Come and find us.

Bizplanss is the leading business plan services providers that work closely with clients in achieving entrepreneurial success. Being the highest rated business plan writing company, we aim at delivering winning, well-researched and inspiring business proposals meeting the industry standards. Our team of business plan consultants are spread all across the UK to help enterprises in sustaining high-performance business operations during the establishment period.