The village as the smallest entity of the Unitary State of the Republic of Indonesia plays a very large role for national development. Therefore, greater attention needs to be paid by the authorities. Social problems are classic problems for rural communities such as poverty, ignorance, unemployment, community diseases and many other problems experienced by rural communities. The location which is far from the city and limited access seems to be justification that the village community deserves to get these problems. In fact, as we all know, building a village is a major milestone in national development. This is because the village has considerable potential if it is utilized optimally, both its natural resources, humans and the authority possessed by the village in managing its own household as mandated by law. 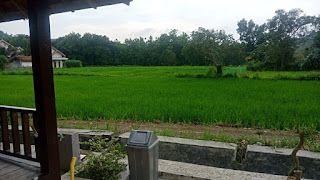 The development of rural communities in order to improve welfare is a goal that cannot be
separated from national development goals. The issue of improving the welfare of rural communities is a very important issue so it is contained in Law Number 32 of 2004 concerning Regional Autonomy and Government Regulation Number 72 of 2005 concerning Villages which provides opportunities for rural communities to regulate and manage their own households, by paying attention and considering various aspects such as the principles of democracy, community participation, equity, justice, and paying attention to the potential and diversity of the community.
The government's attention to community welfare is further strengthened by the issuance of Law Number 6 of 2014 concerning villages which explains the importance of active community involvement, participation and empowerment of the community in improving community welfare. In addition, the attention of the government by providing funds from the APBN in the form of Village Funds DD) and Village Fund Allocations (ADD) allows villages to build and change their destiny with the trust given by the government, both central and regional governments. However, the problem is whether the assistance and authority provided has provided benefits to the community and is able to solve problems for the village community.
Today's phenomenon is that the condition of rural communities in general has not been able to take advantage of existing institutions,
although the government has provided a legal umbrella in the form of laws, many village governments have not been able to use them optimally. Almost all of the villages in Bintan Regency already have BUMdes. Having BUMDes in this case is meant to have been established and has a management structure but the benefits have not yet been felt. The existence of BUMDes is only a formality because every village is required to own it and have initial capital from village funds. However, the reality is that BUMDes have not been able to provide benefits to rural communities.
Many factors are the cause of this, such as the understanding and paradigm of the community that has not been able to translate that the existence of BUMDes is to improve the welfare of the community. In addition, the weakness of human resources who can manage BUMDes is also an important problem and the government's lack of attention in providing guidance to village communities, especially managing BUMDes. In his research, Imam Sahroni Darmawan stated that the obstacles in managing BUMDes in several areas include; the types of businesses that are run are still limited, limited human resources that manage BUMDes and low community participation due to their low knowledge.
Today's phenomenon, the condition of rural communities in general, has not been able to take advantage of existing institutions. Success in managing BUMDes carried out in the Kedungdung Village, Sampang Regency, Indonesia should have implications for the social resilience of rural communities such as reducing unemployment, reducing poverty, creating enthusiasm and work ethic for the community and reduce community disease in the village of Kedungdung. This is in line with research findings by (Sri and Dewi 2014) that the existence of BUMDes in Aik Batu Buding Village has had a very good impact on the community and village government. The existence of BUMDes is able to provide welfare to the community's economy, education and public health, besides that community creativity can also be channeled through BUMDES to continue to improve the development of Aik Batu Buding Village.
The purpose of this research is to see whether the existence of BUMDes as an institution engaged in the economy has been utilized by the village government well to improve community welfare, to see whether the success of BUMDes management has a positive impact on the people of Kedungdung village, such as increasing social resilience. ) and provide recommendations to the authorities in implementing BUMDes to take lessons from the research results obtained. Based on the above background, the author raises the title of this paper: Realizing Community Social Resilience Through Village Owned Enterprise Management (BUMDes) Study of Kedungdung Village, Teluk Sebong District, Bintan Regency.