Trump: What The History Books Will Write

The Trump Era: What The History Books Will Say 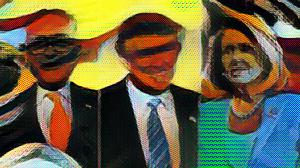 It is unlikely we will vote a Democrat in as president in 2020. I say this for several reasons; first, if Nancy Pelosi does not get on board with her associate Democrats and begin an impeachment, she will be no longer have her job. The second reason is more obvious, what have the Democrats accomplished besides costing the taxpayers almost a million dollars trying to win the 2020 election by proving Trump was in bed with the Russians. If you are an anti-trump fan, ask yourself what will be the Democratic slogan for the election?; Socialist anti-cow poop legislation or better yet, Russian collusion of Trump, revisited?

It is too late for the Democrats to organize a coalition who will believe they did what was right for the country the last 2 years. I am sure Nancy and Chuck will create something. It will be like trying to cram for final exams in college and have the feeling of flunking each class. I was interested in A.O.C's presentations and plans until she jumped on the same bandwagon like the rest of the Democrats. For the Democrats who don't line up fast and jump on, they will be left behind in the mud and cow-poop.

I live in a state who votes Republican each election. I wish someone, the Democrats, would have addressed the electoral college system and made plans to revise it. I also wish they have submitted a Healthcare plan to Congress and was being voted on. I believe it's obvious our healthcare in the U.S. needs to be addressed. I will not see these pressing issues even discussed. It's time to put away the Ninja Swords Democrats, you can't win anymore against the modern cannons of today. This congressional war must stop so we can resolve real issues.